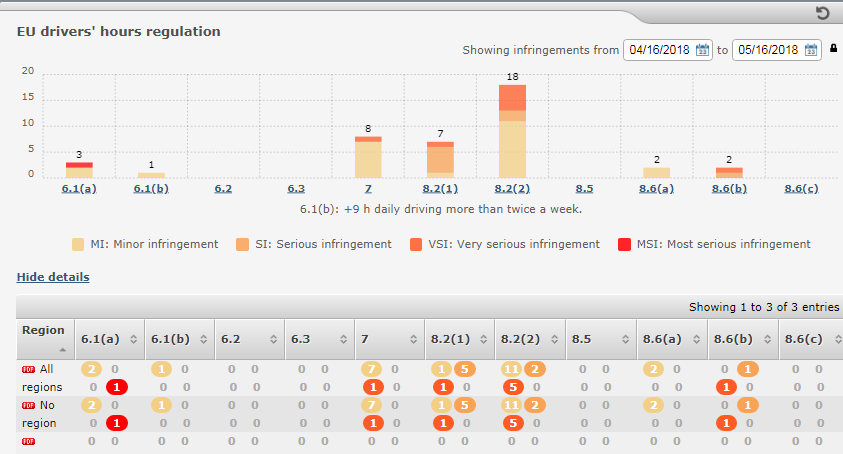 Article 7 Insufficient break during a 4.5 h driving period.
After a driving period of four and a half hours, a driver shall take an uninterrupted break of not less than 45 minutes, unless he takes a rest period.
This break may be replaced by a break of at least 15 minutes followed by a break of at least 30 minutes each distributed over the period in such a way as to comply with the provisions of the first paragraph.

Article 8.5 Less than 9 h of daily rest (multi-manning).
By way of derogation from paragraph 2, within 30 hours of the end of a daily or weekly rest period, a driver engaged in multi-manning must have taken a new daily rest period of at least nine hours. 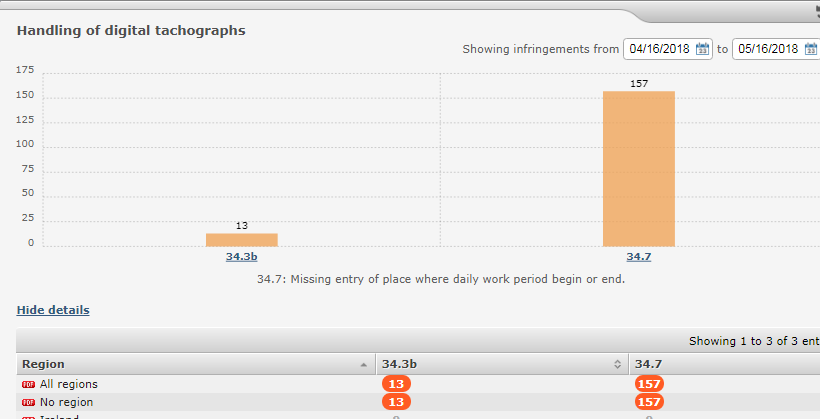 Article 34.3(b) Manual entry missing
When, as a result of being away from the vehicle, a driver is unable to use the tachograph fitted to the vehicle, the periods of time referred to in points “Other Work, Period of Availability and Rest/Break” shall:
(b) if the vehicle is fitted with a digital tachograph, be entered into the driver card using the manual entry facility provided for in the tachograph.

Article 34.7 Missing entry of place where daily work period begin or end
The driver shall enter in the digital tachograph the symbols of the countries in which the daily working period started and finished. However, a Member State may require drivers of vehicles engaged in transport operations inside its territory to add more detailed geographic specifications to the country symbol, provided that the Member State notified those detailed geographic specifications to the Commission before 1 April 1998. 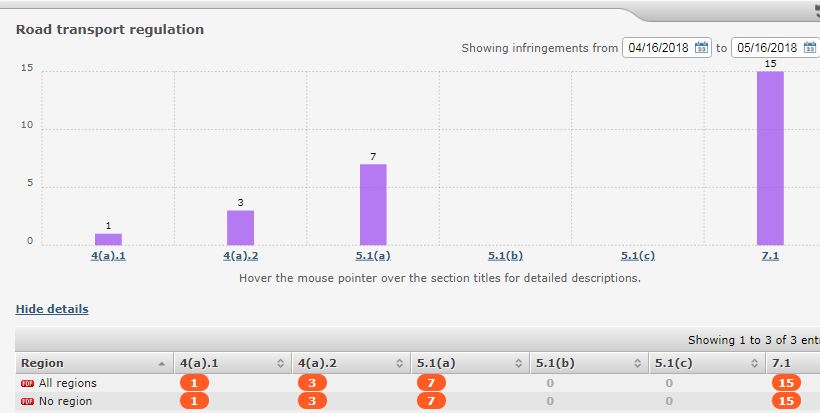 Article 4(a).1 The total weekly work period may not exceed 60.0 hours

Article 4(a).2 During a period of 17 weeks, the average weekly work period may not exceed 48 hours

Article 5.1(a) Rests should be taken when needed or after a maximum of six hours of work

Article 5.1(b) During a working period of between six and nine hours, a minimum of 30 minutes of rest is required. Resting periods may be split into periods of at least 15 minutes each

Article 5.1(c) During a working period of over nine hours, a minimum of 45 minutes of rest is required. Resting periods may be split into periods of at least 15 minutes each

Article 7.1 If night work is conducted, the total daily work period may not exceed ten hours within a 24 hour period